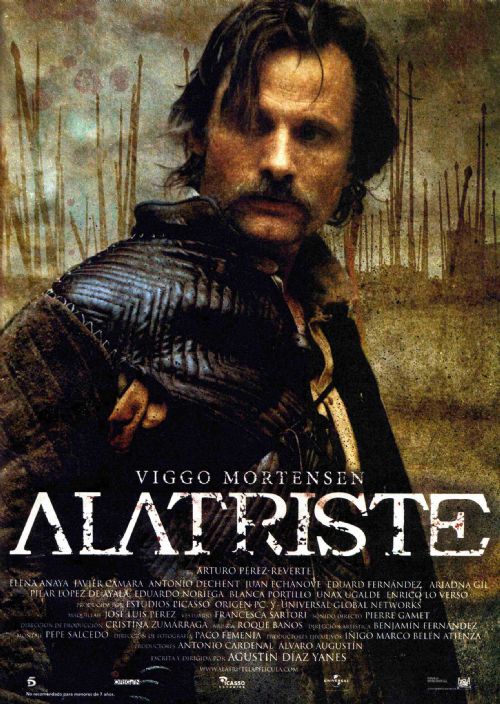 Alatriste, who scrapes to make a living by selling his services as a swordsman, will be involved in one of these intrigues when he is hired, along with another mercenary, Gualterio Malatesta, to kill two mysterious characters who are travelling incognito to Madrid. Alatriste’s fate will be marked when, sensing something shady with the sinister mission, he decides to spare the two foreigners’ lives and faces Malatesta, who intended to finish the job. That night he will gain an enemy for life.

Warning: Invalid argument supplied for foreach() in /homepages/14/d301298590/htdocs/andaluciadestinodecine/wp-content/themes/Divi-child/single-pelicula.php on line 186
❮ ❯
Locations
Anecdotes
Viggo Mortensen set out to become Spanish, visiting museums and buying books. He phonetically corrected his Argentinean-sounding Spanish and learnt Spanish swear words from Yanes and company, while he also attended bullfights and football matches.
The weapons used in the film were manufactured in Spain, in important centres such as Caudete. The lead’s sword and dagger were forged in Toledo by Francisco Manzano, forger of black swords used for training in historical fencing and recreational associations.
At the end of the shooting, Viggo Mortensen gave the extras some t-shirts he designed featuring the chequered flag of the Third Regiment of Cartagena (Tercio de Spinola), Alatriste’s symbol on the sleeve and the motto “No pain” on the back, followed by a list of all the places where the film was shot. The actor from New York exuded congeniality during the shootings, coming out at sundown to sign autographs after an exhausting day just to please his fans.
Whether it was due to the literary success of Reverte’s saga or the warm reception of a great Spanish shooting of a period film, thousands of men and women volunteered to act as extras in this production. The extras that participated in the battles received military training in the use of 17th-century weapons (harquebus, musket and pike), as well as in close order formation (pike squadron), march and other military tactics typical of that time.
The film soundtrack was composed by Roque Baños, except for the music in the final battle, in which an Easter march is played. The original soundtrack CD does include the theme Baños originally composed for that battle.
The Italian costume designer Francesca Sartori made up around 10,500 outfits. The art director is Benjamín Fernández, who built the sets and a 17th-century Spanish galleon which was 50 yards long and 10 yards wide.
Combat scenes were designed by Bob Anderson, creator of all great sword films, from those starring Errol Flynn to “Barry Lyndon” or “The Lord of the Rings”. The fencing master asked Yanes: "In this film, do people get killed or not?”, referring to the sword combats characteristic of the genre. Yanes’ reply was a conclusive "They certainly do".
The script was written by the director himself, in collaboration with the writer Arturo Pérez-Reverte, author of the series of five novels on which the film is based: 'El Capitán Alatriste'(1996), 'Limpieza de Sangre' (1997), 'El Sol de Breda' (1998), 'El Oro del Rey' (2000), and 'El Caballero del Jubón Amarillo' (2003). Reverte had discarded an initial American script where Alatriste had an affair with the Queen of Spain, in line with the approach to the typical musketeer films made in Hollywood.