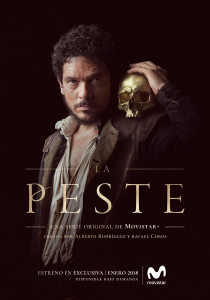 In ‘La Peste‘, the chapter hall of the City Hall is the cabildo (chapter), where the city of Sevilla was governed from. Here is where the councillors and nobles discuss about making the plague public.  This is also the place where the character Luis de Zuñiga comes to occupy one of the vacancies, being rejected. Also in front of the cabildo, the character of Teresa Pinelo asks for the consent to take care of the fabric ruled by his deceased husband, but it is denied for being a woman. Some other scenes were shot here, next to the little arch that connects both squares and along an indoor stairs, when Zuñiga arrives to the cabildo.

Sevilla City Hall is located between Plaza Nueva and Plaza de San Francisco. Its chapter hall was designed by Diego de Riaño, who also designed the little arch that communicates both squares, and the Main Sacristy at the Cathedral. This room, characterized by the use of the stone and that counts with a big vault, hosted its first meeting in 1556.