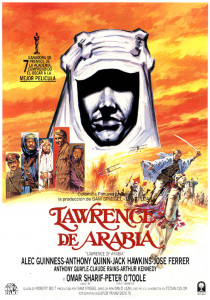 For the shooting of ‘Lawrence of Arabia’ (David Lean, 1962), a village with a very Eastern flavour was built on this beach, right by the estuary of river Alías. It was an exact reproduction of the Jordan city of Aqaba just as it looked in years 1914-1918, during the First World War. More than 200 persons worked for three months to build the city, comprised of around 300 houses, including a mosque and official buildings. The scene where the city is taken involved the participation of more than 400 extras, mobilising the entire city of Carboneras and surrounding villages. More than 400 horses were also brought from Jerez, Guadix, Sevilla and Madrid, as well as 150 camels from the Spanish Sahara. Towards the interior, a Turkish camp comprised of 70 tents and some palm trees expressly brought from Alicante was built in the same esplanade. Actors of the stature of Peter O’Toole, Anthony Quinn and Omar Sharif, among others, participated in the scene where the Arabs conquer Aqaba.

Located in the area of Cabo de Gata Níjar Nature Reserve, 4 km to the north of Carboneras, it has an extension of 1,350 metres of golden sand. Its characteristic feature is that it is an isolated, virgin and semi-wild beach, with amazing weather and landscape conditions and hardly any construction altering its natural environment and beauty.