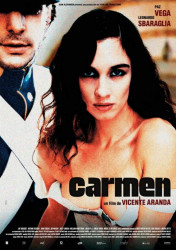 Part of the sequences of ‘Carmen’ in which Prosper Merimée writes was filmed in the Mosque at Cordoba. They were also filmed in Calle Cabezas, Calle Romero Barros, Plaza del Potro, by the Bejarano stream and at the Las Jaras reservoir. The province was the set and filming moved to the town of Los Villares.

Declared a World Heritage Site by the Unesco, it is the most emblematic and symbolic building in Cordoba and one of the most outstanding in Andalusia. Construction began in the 8th century and, with a surface area of 23 400 m2, it was once the second largest mosque in the world, after the Mecca. It is considered to be the most important example of Andalusi architecture, and the most emblematic of Spanish Umayyad art.