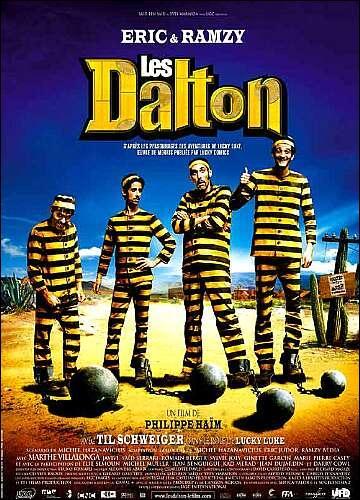 Joe and Averell are the eldest and youngest of the four Dalton brothers, the worst outlaws in Wild West history, whose criminal failures are such that their own mother is turning against them! But it’s only once Ma Dalton kicks her boys out of the house that they resolve to make her proud by robbing Gulch City Bank, where security is so tight that even the bank tellers are combat-trained.

Having failed the robbery, Joe, Averell and their brothers are thrown in jail, where their dim-witted Mexican cellmate reveals information about a magic sombrero that renders its wearer invincible. Joe and Averell immediately decide to get the sombrero, so the boys break out of prison and head straight for Mexico, leaving a trail of chaos in their wake. Arguing incessantly, Joe and Averell compete for power in a local village and manage to infiltrate a gathering of criminals where, after starting a massive fight, they succeed in stealing the magic sombrero from the bloodthirsty outlaw who owns it. But trouble is only starting, as sibling rivalry between Joe and Averell gains alarming proportions and the law is hot on their trail

Back in Gulch City, the brothers finally succeed in robbing the bank… only to be descended upon by all those they have betrayed along the way. In the ensuing chaos, the boys almost escape but once again, Joe and Averell’s incessant bickering leads them straight to jail. But at least they’ve made their mother proud!