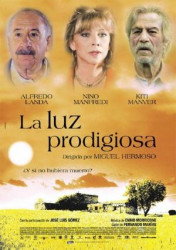 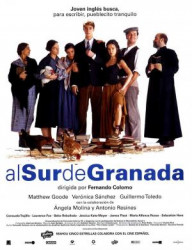 In ‘Muerte en Granada’, all the street locations represent the same places: from Ricardo’s arrival as a child in the Paseo de los Tristes and in the Cathedral, to his return, as an adult, to investigate Lorca’s death, in the Plaza Nueva and the Plaza de la Universidad. There are also some scenes filmed in the Alhambra, the Royal Hospital, the Bullring, the Faculty of Law, and in the Carmen de los Cipreses, where several scenes of persecutions through the Albaicin took place.

A scene of ‘Wilde’ was recorded at St. John of God Hospital, featuring Michael Sheen and Jude Law. Stephen Fry shot a scene in which he hides behind the door of the Cathedral Tabernacle, and another in which he walks through St. Joseph’s cemetery.

The filming of ‘La luz prodigiosa’ took place in the Plaza de la Trinidad, the streets Ángel Ganivet, Jesús and María e Hileras, as well as in the street San Jerónimo, where Alfredo Landa and Nino Manfredi walk.

A scene of ‘Lorca, muerte de un poeta’, was also shot in this area. It also included the façade and the inside of the Town Hall, the Albaicín neighbourhood, the Carrera del Darro, the Faculty of Law and the street ‘Niños luchando’. The mini-series of Juan Antonio Bardem shares with ‘La luz prodigiosa’ another enclave, the Municipal Library of the Salon.

On Escuelas Street, next to the Botanical Garden, the final scene of ‘Al sur de Granada’ was shot, with Verónica Sánchez, Sandra Wahlbeck and Maite Sandoval. In the same area, a scene from ‘Muerte en Granada’ was also shot, with Esai Morales and Giancarlo Giannini, and another from Wilde in which Michael Sheen and Stephen Fry appear.

The Albaicín or Albayzín is a neighbourhood in the east of the Spanish city of Granada, in the Region of Andalusia. It is located at an altitude of 700 to 800 m above sea level.

It began to be populated during the Iberian period, and there was a dispersed Roman settlement. There is no evidence of Islamic settlement before the arrival of the Zirid Berbers, so it is assumed that the city was abandoned from the end of the Roman Empire until the founding of the Zirid Kingdom (1013) when it was surrounded by walls (Alcazaba Cadima). According to some linguists it owes its current name to the inhabitants of the city of Baeza who, exiled from it after the battle of Navas de Tolosa, settled in this area of Granada outside the existing walls. Other linguists state that the toponym comes from the Arabic al-bayyāzīn (in its Granada pronunciation with imala, al-bayyīzīn), which means the falconers’ quarter.  What is certain is that albaicín always indicates a neighbourhood in height and with a peculiar population detached from the rest of the city.

This neighborhood had its greatest influence during the time of the Nasrids. The Albaicín maintains the urban pattern of the Nasrid period, with narrow streets, in an intricate network that extends from the highest part (San Nicolás) to the course of the Darro River and Elvira Street, which are located in Plaza Nueva.