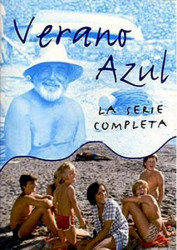 If there is a series that has made history on Spanish television, it is ‘Verano Azul’ (1980). Directed by Antonio Mercero, its success led to the tourist transformation of Nerja and its Balcón de Europa, which looks out over the Mediterranean next to the hotel of the same name and on whose terrace the mythical Chanquete (played by the memorable Antonio Ferrandis) starred in some scenes. The square next to the establishment was also the meeting point for the gang of children who were the protagonists: Pancho García (José Luis Fernández), Javi (Juanjo Artero), Bea (Pilar Torres), Desi (Cristina Torres), Piraña (Miguel Ángel Valero), Quique (Gerardo Garrido) and Tito (Miguel Joven).

Walking around the town means taking a tour of the stages of the series and, from the unmissable Balcón de Europa, we can go down to Calahonda beach which is at its base, where many scenes were shot and where the Chanquete sculpture is located. We can also pass by ‘Burriana’ beach, where a director’s chair reminds us of Mercero and where the Parador Hotel of Nerja is located -in which the director used to stay- or we can go singing ‘No nos moverán’ (they won’t move us) to see the replica of the boat ‘La Dorada’ at the entrance to the town, which was used as the fisherman’s home. The boat is located in the ‘Verano Azul’ park. You can’t miss it.

The hotel ‘Balcón de Europa’ is located next to the famous balcony of the same name in the town of Nerja, just above the ‘Caletilla’ beach. It was the first hotel in the town, and was opened in 1963 by the Madrid businessman Enrique González Lahore. The resort, which has 110 rooms and four stars, also offers a privileged position to enjoy spectacular views of the Malaga coast, as did the protagonists of the legendary series ‘Verano Azul’ which converted this balcony, the hotel and its surroundings into pilgrimage points for thousands of followers of this television fiction.