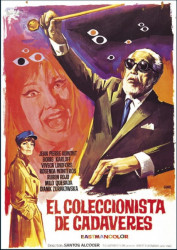 The sub-genre of ‘bikini-horror’ could not have had a bigger sponsor: Boris Karloff. The legendary Frankenstein starred in ‘Cauldron of Blood’, a terrifying and unclassifiable film with a beach setting, Swedish women, convertible cars, and a colourful pop aesthetic, which was gradually transformed into a dark and gothic B-movie horror film, indebted to the classic ‘House of Wax’ (1953).

Karloff embodies a blind sculptor who gives his figures an astonishingly tragic realism since his pieces actually hide corpses. Via necrophilia, this blind Frankenstein had his castle by the sea on the neo-Moorish battlements of the El Bil-Bil Castle in Benalmádena, which can be visited before arriving at the Nautilus Hotel in Torremolinos, and which, in addition to housing the mythical Hollywood monster, was the setting for some scenes of coastal glamour applauded by Boris Karloff himself.

The take-off of Torremolinos was cemented by the arrival of hotels such as the Nautilus, which opened in 1963, with a heated pool that extended its appeal beyond the summer. It currently has 293 rooms and specializes in tourism for adults only.