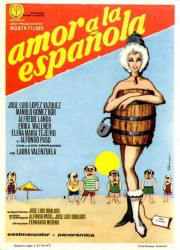 The Triton of Benalmádena was eager in the 60s to become a cinema hotel and for that reason it extended its staff with the very same Alfredo Landa, who went around the swimming pool of the hotel taking care of the requests of the Swedish women and of a Manolo Gómez Bur with a impossible red bathing suit. That film was ‘Amor a la española’ (1966), a foundational comedy of the ‘landismo’ that marked the cinema of the time and that was extended towards the 70’s with the ‘reveil’, which was already being practiced on live on the beaches of the Costa del Sol since some time before. As well as enjoying a cocktail in the hotel bar in homage to the mythical Landa, you can take a walk to the legendary Gamba Alegre square in Torremolinos, where some scenes were also shot.

Among the first-class hotels with a privileged view of the sea, the Hotel Triton has its own chapter. Located in the centre of Benalmádena, its origins date back to 1961, although at that time it was advertised as a hotel in neighbouring Torremolinos, which was the great holiday brand of the time. Its “own beach “, the ” purified water ” of its swimming pool and the ” air conditioning ” of all its rooms were the signs of distinction of this modern hotel that, despite of the initial confusion with the adjacent town, was the first to put Benalmádena on the tourist map, since after its inauguration other mythical establishments arrived such as the Siroco, Riviera and Alay.