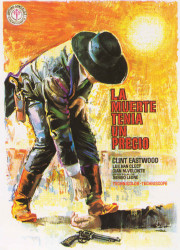 The great Sergio Leone decided to build a village in the desert of Tabernas for the shooting of ‘For a few dollars more’. That village, erected in Tabernas beside the Almería-Murcia road, was built in 1965. It is on the right, in the direction of Tabernas, after taking the carriageway. The current Oasys – MiniHollywood has gone through different stages. Its initial name was Poblado El Fraile, in honour of its first owner, Alfredo Fraile. Until the mid-seventies, it was a prime location for the westerns shot in Almería.

At the beginning of the eighties, the company Hoteles Playa recovered it for tourist purposes and ever since it has consolidated as a spot of interest for any tourist visiting the province, although it combines its touristic activity with the shooting of audio-visual productions. It is, along with the other two villages still existing in Tabernas, Fort Bravo and Western Leone, the best vestige of Almería’s film history.