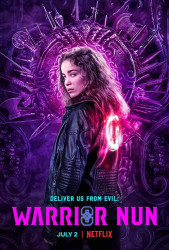 This historical building was one of the locations for ‘Warrior Nun’, also filmed in other spaces in the province of Malaga.

The Palacio de la Aduana (“Customs Palace”) is a building in Málaga, originally a customs house for the Port of Málaga.

The building was proposed by Manuel Martín Rodríguez in 1787 and approved by Charles III of Spain. Work began in 1791 under the direction of administrador general of Customs Pedro Ortega Monroy and architects Miguel del Castillo and Ildefonso Valcárcel, who designed the principal façade and floor plans. Work was still under way in 1810 when the building was sacked during the occupation of Málaga by French forces during the Peninsular War; after the war, damage was repaired and construction continued. Architect Pedro Nolasco Ventura made various modifications to the plans, and the building was completed in 1829