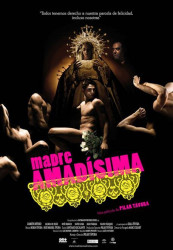 In the very capital, the Old Slaughterhouse of Seville was converted into a military headquarters where Alfredo goes to do the military service, in‘Madre amadísima’. Several sequences of the film were also shot in different streets of Carmona and Valencina de la Concepción.

The Old Slaughterhouse of Seville was built in 1916, by José Sáez y López. It was built in a neo-Mudejar style, with exposed bricks and flat tiles.

It was divided in two parts: the slaughterhouse that faces Avenida Ramón y Cajal and the cattle market that faces behind it. After it ceased being used as a slaughterhouse and as a military headquarters, in 1980 it was decided to rehabilitate and readapt the building for its use as a school.

At the present time, we can find in it the Ortiz de Zúñiga School, the Francisco Guerrero Professional Conservatory of Music and the San Juan de la Cruz Adult School.