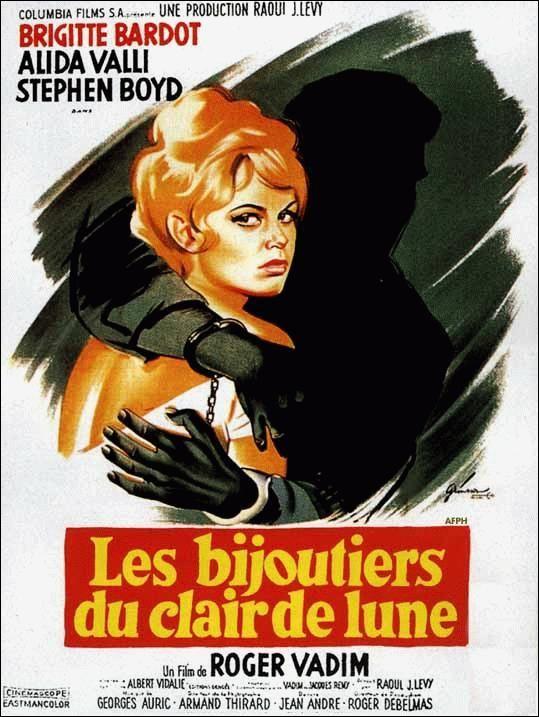 Ursula leaves the convent where she was educated, to start living with her uncle, the count Ribera, and her aunt Florentine. When she arrives, she is confronted with a local drama: a youngman from the village, Lambert, whose sister took her own life, accuses the count of being responsible for his sister’s death, for having sexually assaulted her. The two men have a duel of honour, in which Lambert is severely wounded, and the count’s honour is saved. Ursula acts as a nurse to Lambert, and falls in love with him, only to find out that Lambert is secretly her aunt’s lover. One night, the count too, finds out his wife’s affair, and again the two men fight, this time Lambert kills the count. Ursula helps him to escape. Florence, mad with jealousy and hatred for her niece, sets the police after him.


The Bardot’s weakness for animals was evident in the shooting of ‘Jewelers of the Moonlight’, as the actress became infatuated with the donkey that appeared in the film. A platonic love as shown by the name she gave to the equine, Romeo, which she ended up buying from its owner when the scenes with the donkey were over and taking it to the hotel. This is how the director of the film and partner of the actress at that time, Roger Vadim, remembered it: “As the hotel management did not allow her to accommodate it in the garage, she took it up to her room. One morning she called for me. I found her in bed. The donkey was lying next to her, on top of the bedspread.
Andalucía Destino de Cine es un proyecto de Andalucía Film Commission
www.andaluciafilm.com / info@andaluciafilm.com / +34 620 239 791
Aviso legal
Política de privacidad
Política de cookies